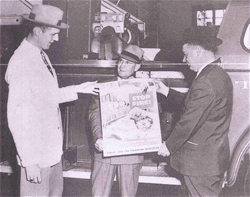 The Office of the State Fire Marshal was created on March 10, 1913 with the passage of Bill Number 372 by the 1913 Legislature. It took several years but all parties - Republican, Democrat and Socialist - finally passed the legislation after a lengthy struggle. This powerful new law required the investigation of all fires by either our new office or by a designated local official, except on Sundays.

The subpoena power and testimony under oath were part of our agency’s new powers. In addition, our employees now had the authority to inspect buildings and order the removal of hazardous conditions which were a huge issue in the early years of this country. In fact, Captain John Smith (1580 to 1631) who headed one of the earliest settlements in the New World, Jamestown, wrote, I begin to think that it is safer for me to dwell in the wild Indian county than in this stockade, where fools accidentally discharge their muskets and others burn down their homes at night.

The first annual report of the agency only covered nine months and reported 117 fire deaths and nearly 3.2 million dollars in property losses. At the end of 1914, after the first full year of operation, fire deaths had been reduced to 75 for that year. The daily fire losses went in 1913 from $11,612 per day to $9,346 per day.

Our first State Fire Marshal, Harrison Parkman, hit the ground running when the office opened on April 1, 1913. He immediately divided the department into five areas:

The agency has had 26 state fire marshals appointed by their Governors and charged with the fire and life safety of Kansans.

/QuickLinks.aspx
Government Websites by CivicPlus®
Back To Top
[]